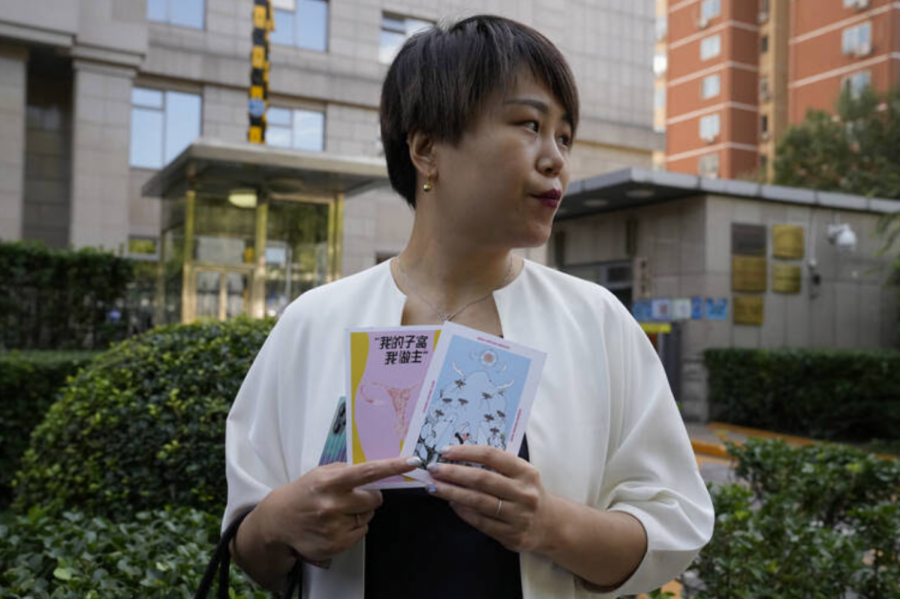 The card on the left reads: “My womb, my choice.”

There is a recent Texas law that has made abortion illegal unless the fetus is aborted within 6 weeks of pregnancy, which is usually too early for a woman to know that she is pregnant. However, Texas is not the only place where the government is trying to control women’s bodies.

A 33-year-old woman in China who has filed a lawsuit for the right to freeze her eggs went to the Chaoyang People’s Court in Beijing to have her case heard Friday September 17.

Teresa Xu, self-employed and a feminist, had opened this case in December and waited for two years. In 2018, when she was 30, Ms. Xu tried to freeze her eggs at Beijing Obstetrics and Gynecology Hospital, but she was ultimately denied because she was not married. Because of this, she decided to sue the hospital.

Implemented in 1980, the one-child policy forbade families to have more than one child because there were concerns that the population was exponentially growing. In October 2015, this policy was abandoned, and families were allowed to have up to two children. In 2021, this policy was changed and increased the number of children to three. These actions have been taken to reverse the declining birth rates. Despite this, in China, there is a stigma of having births without marriage. Pregnant women must provide marriage certificates to receive pregnancy checkups.

A 2003 law prevents single/unmarried women from freezing their eggs unless there is a medical issue. However, men can freeze their sperm regardless of marriage status.

“I went to [the] hospital to get some medical advice, but I was advised by a doctor to get married and have kids early,” Xu said in 2020. “I already have so much pressure from this society. I am here representing the many Chinese women [who want change].”

“My eggs have aged with me, so the timing has gotten more and more pressing,” Xu said in 2021.