Iconic for its picturesque cityscapes and stunning portraits, American realist painter Edward Hopper is renowned and celebrated for the dramatically surreal sensation that his paintings create. Hopper’s art pieces, the majority of which are painted with a muted palette of acrylics, often emphasize light and windows. Arguably, though, the most identifiable quality present in every one of his paintings is the suffocating loneliness that penetrates the canvas to affect its audience. Even when painting something as seemingly lifeless as a lighthouse or a stone building, Hopper manages to convey the alienation that plagues modern life.

Born in 1882, Hopper spent six years studying fine art at the New York School of Art upon completing high school. It was during those years that he developed a style reminiscent of French painters, Edgar Degas and Édouard Manet, whose focus on modern life resonated deeply with Hopper.

Hopper’s early artistic career was tinged with failure. His 1920 solo exhibition at Whitney Studio Club had zero sales; but by 1923, his stars changed, and his shows began to sell out, vaulting him into massive success. By the 1930s, Hopper’s work was housed in prestigious collections, including the Museum of Modern Art and the Art Institute of Chicago.

Interestingly, many of the females pictured in Hopper’s dramatic pieces were based off of one woman: Josephine Verstille Nivison, whom Hopper affectionately referred to as his wife, Jo. Married in 1924, their relationship began sweet but gradually soured. The couple had frequent rows that, sometimes, escalated into fights. This marital unhappiness is reflected in Hopper’s serious and solemn portraits and his isolation is evident in many of his pieces, where silent couples are painted facing away from each other.

Edward Hopper’s art has left an indelible mark on artists all over the world, including those at San Marino High School. His pieces are studied across all four levels of our visual art classes, with focus on his attention to chiaroscuro (the contrast of light and dark) and his ability to capture the weight of social seclusion within his brushstrokes. Russell Tsai, a student in Intermediate Art, remarks that he loves Hopper’s work because his pieces feel “cinematic and suspenseful, almost like individual scenes of a film.” Isabelle Kang, a student in the AP Art class, reflects that Hopper’s often heavy subject matter leaves her feeling “an indescribable pity for the artist; it can’t be easy living such a lonely life.”

Hopper’s paintings continue to inspire young artists to create artistic pieces that evoke emotion within their audiences. Undoubtedly, just as the lonely girl does in “Morning Sun,” his work will continue to cast a long shadow. ​​ 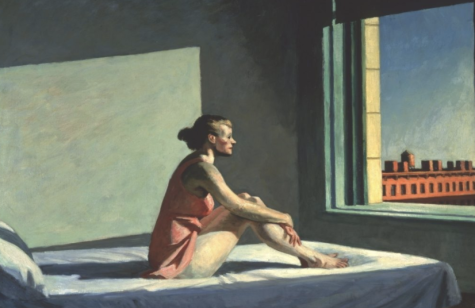 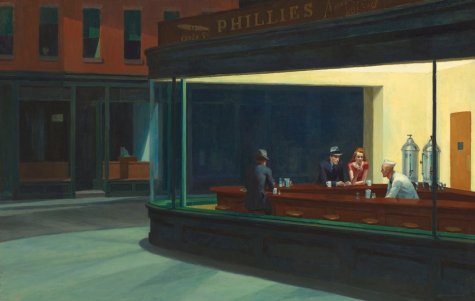