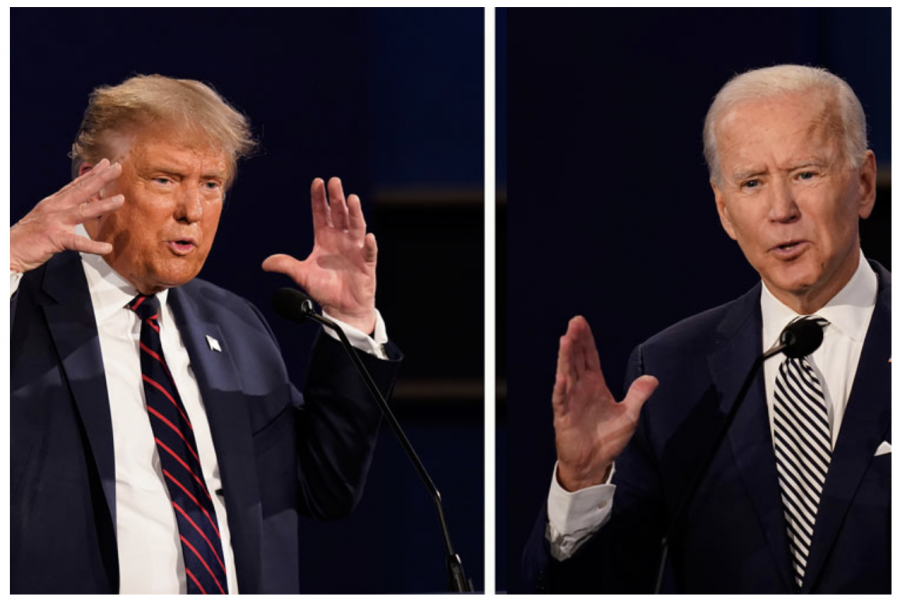 Living amidst one of the most historical years of all time, 2020 has given us a fair share of tragic events. Whether it be uncontainable wildfires or a global pandemic, one event that sets itself apart from the rest was the first presidential debate of the year.

It was a tragedy of its own.

It began with moderator Chris Wallace asking about President Trump’s decision to appoint a new justice to the Supreme Court in replacement of Justice Ruth Bader Ginsburg. President Trump stated that because he won the election he has the right to appoint a new justice under his term as current president. President Trump finished his statement in 2 minutes, uninterrupted. When Former Vice President Joe Biden countered that argument by suggesting that, “The American people have a right to have a say,” and that “we should wait” until after the presidential election to select another justice, he was unable to finish his statements without being interrupted by Trump for at least 2 minutes. As Biden attempted  to conclude his statements, he was continuously interrupted and moderator Wallace even needed to intervene and ask Trump to, “Please let the vice president talk.”

As the debate progressed Trump even “debated” with the moderator because he was not allowed to talk more than he already had.  One of the interesting points made by Wallace was when he mentioned how both candidates had agreed the rules of the debate, which would be 2 minutes uninterrupted.  However it seemed that President Trump nor Mr. Biden at times could oblige to these rules.

Even The LA Times suggests that, “Trump,… has never been a conventional debater. He has no use for the tyranny of timekeepers, the standards of common courtesy or the obligations of social grace”(Barabak and Mason).

Out of frustration, “Would you shut up, man?” were Biden’s words exclaimed to President Trump, saying what many were thinking.  As Trump failed to follow basic instructions and allow Biden to speak uninterrupted, it was very definitive of Trump and to see how unprofessional, obnoxious and easy it is to provoke him to a point where he cannot allow others to speak without having to interrupt them.

Usually the viewers of the debate decide who has “won” one they have had the chance to absorb all the information that they have just received. However this debate was a little harder for many to come to consensus on. Many believed that President Trump won this debate because of his ability to take control and say everything that he needed to address. But many were also impressed at Biden’s ability to respond appropriately to the literal bullying from President Trump. Trump even launched a very inappropriate comment about a sensitive topic regarding one of Biden’s sons who had served in the military but also fought through an opioid addiction. Biden was able to respond with “This is not about my family. It’s not about your family. It’s about the American people,” which was telling about his character and morals. Biden was not there to insult or bully the other candidate, but instead to address the nation.

And as a nation still processing the many tragedies brought to us within the last 9 months, we await the results the next tragedy…debate will bring; set for October 15.