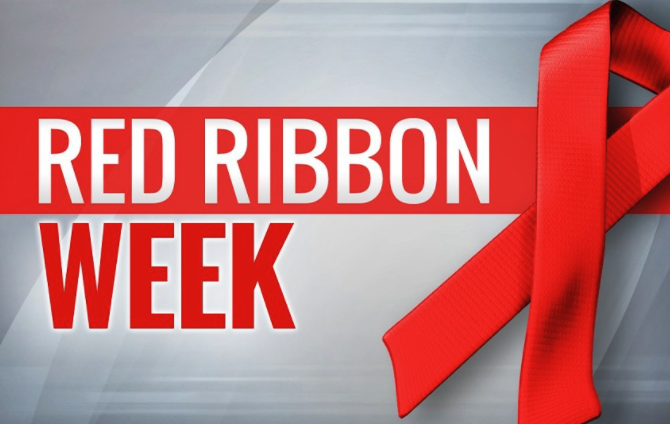 Red ribbon week is a movement to bring awareness to one of the most common issues within the world, drug addiction. This year, Red ribbon week lasts from October 23 through October 31, and during this week, awareness is brought to students and young children in an enthusiastic way to show what kind of damage drugs can bring to themselves.

The pledge of Red Ribbon according to Redribbon.org is, “I pledge to grow up safe, healthy and drug free by, understanding the dangers of drugs and abuse, respecting myself and being drug free, spreading the word to family and friends about the importance of being healthy and drug free.” This pledge can also include not drunk driving. Red ribbon week  is a great method to educate young kids because it brings fun activities that will draw the attention of many kids to learn about. For example, during the week, schools may create a spirit week where students can dress up as the promoted prompt for the day. Each day of the week gets a new idea. Many students tend to participate in this week for support and encouragement to learn. Schools also encourage students and teachers to put handmade creative posters up on their classroom door, bringing awareness to the issue.

Red Ribbon Week is a great opportunity to bring schools together in unity to all learn about the different damages of drug use. According to Justthinktwice.gov, Red Ribbon Week is one of the largest and oldest drug prevention programs. Red Ribbon Week was started because of a person named Enrique Camarena, who was a DEA agent, also known by his nickname, Kiki. He was tortured by drug traffickers after being kidnapped. After his death, people all across the US became angry and more aware of the damage of drugs. Due to this tragic event, everyone started to wear red ribbons to symbolize commitment to staying away from drugs. The first Red Ribbon Week to take place was in 1988. It was coordinated by the Nation’s Family Partnership when the Reagans were in their second 4 year term at the White House.

Red Ribbon Week has brought a great amount of education and awareness to all kinds of people and students all around the US. The use of alcohol, tobacco and other commonly used drugs have brought together over 80 million people to participate in Red Ribbon Week each year during a week in October.